The Ha'penny Bridge (officially Liffey Bridge) is a 43 m long, nearly 3.7 m wide pedestrian bridge dating from 1816, which spans the River Liffey in the center of the Irish capital Dublin and thereby connects the Temple Bar area,with the Bachelor's Walk. It was given its popular name because of the previously payable pedestrian toll of one penny; the official, but hardly used name is Liffey Bridge. The bridge is one of the most photographed sights of Dublin and is seen by many as the very symbol of the city.

At the site of today's Ha'penny Bridge previously existed a ferry. As the seven ferryboats that were in use were in pretty poor condition the operator William Walsh was encouraged to renew them or to replace them by a bridge. Walsh chose the latter and instructed the British construction engineer John Windsor and Colebrookdale Company from the English Shropshire with the construction of an iron bridge. This company had many years earlier constructed the Iron Bridge in Shropshire, England, now a World Heritage Site as the first bridge in the world made of cast iron. Ha'penny Bridge in Dublin is also made of cast iron and was opened in May 1816 after a year of construction. It was built under the condition that it - should it be perceived as a nuisance within one year - has to be removed again without the city incurring costs. As compensation for the lost revenue from the ferry Walsh was granted in return the right to levy bridge tolls for the next one hundred. The amount of the toll of a halfpenny originally corresponded to the price of a ferry. For passing the bridge there was a hub in which the half-pence coins were interject at each end. The pedestrian toll was abolished in 1919. 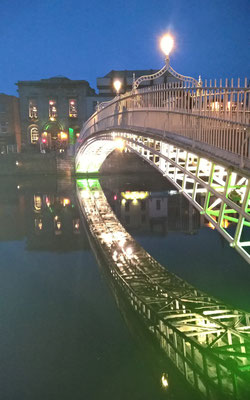 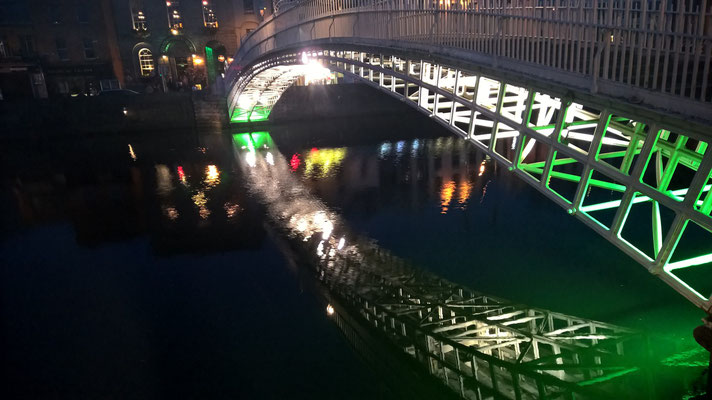